Two weeks ago I ordered the Therm-a-rest NeoAir XTherm Medium at Bergfreunde.de.
Up till now I’ve been using an old (well it must be about 10 years old now) Therm-a-rest self-inflatable 3/4lenght mat. But in the last few years it started to lose air during the night, leaving me to wake up on a cold tent floor. Maybe it’s a womans thing but I kind of didn’t want to bother searching for a hole, so instead of fixing it, I started using a foam sleeping pad under it. As I wasn’t doing any distance-walks (just camping) I didn’t think of it as a problem.
Though now the John Muir Trail is coming up and things are different! 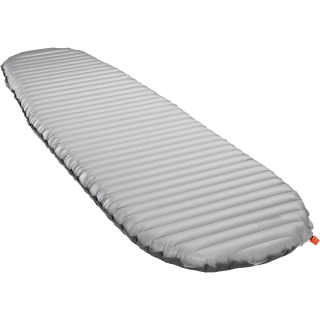 I’ve been going through and forth comparing different sleeping mats but I always ended up looking at the TaR NeoAir. So I went to Globetrotter in Frankfurt and tried them out. First I tried the yellow Therm-a-Rest NeoAir XLite. It appeared to me being brittle yet comfortable. Then I tried the XTherm and I actually didn’t want to get up anymore… If not all those people would have been walking around, I could have taken a nap there! Compared to the XLite the XTherm appears to be more durable… Whether that is really the case or not, I cannot say… Yet the bottom of the mat has a different material, which also has some sort of anti-slip feature, that feels stronger. Writing this post I found out the bottom fabric is 70d Nylon Soft Grip. As for the XLite the bottom fabric is the same as the top fabric: 30 d High Tenacity Nylon.
After all the XTherm is some grams heavier than the NeoAir XLite:
NeoAir XLite Woman: Weight: 310 g, Size: 51x168cm, Packed: 23x10cm
Neo Air XTherm Medium: Weight: 430g, Size: 51x168cm, Packed: 23x10cm
Both mats (inflated) about 6,3 cm thick!
Now why did I pick the XTherm and not the NeoAir XLiteWoman?
It didn’t pick the XTherm because of the more durable appearance (ok, now I would lie if I’d say it didn’t influence my choice at all, yet that wasn’t the biggest factor). I picked it because of the R-Value, being 5,7… meaning it should keep my bottom warm even at -23°C!

Being a slim and “quickly freezing” woman I thought this to be the safer choice!
The XLite Woman might have kept me warm till -10°C… which actually might have done it too… Hm, seems like the durable appearance influenced my choice more than I wanted to admit. Well and there was something else in my mind.
Earlier I bought the sleeping bag Western Mountaineering Apache MF, having its comfort zone at about -4°C. I thought that’d definitely be warm enough for the JMT! Till a friend told me: No way a bag with 500g down filling will keep you warm at -4°C. (I’ll write a review on that one -not on the friend – on the sleeping bag of course- later)… So I started doubting, as we woman tend to do quite offen…
This is what was going through my mind, which might have convinced me buying the NeoAir XTherm: “I don’t have the money to buy a warmer lightweight sleeping bag, so I’m gonna have to do it with the Apache. The cool thing is that I can shake the down in the apache from the back/bottom to the front/top. So if I do that, shaking all the down to the top, I might have a sleeping back that keeps me warm on top… not on the bottom… Now if I buy the NeoAir XTherm it will keep my bottom warm for sure sure sure! Tadaaa…my warm sleep system!”

So… I bought the XTherm and tested it during my “sleep alone in the woods adventure” yesterday.
Temperatures were at about -5°C, no rain/snow.

Bottom line: The Therm-a-Rest NeoAir XTherm appears to be a perfect womad lightweight sleeping pad (at least in winter and so far)!!!