On day 1 we were dropped off at El Portillo (2000m/6561ft), from where we made our way through a desertlike landscape till the foot of the Teide. As we couldn’t leave earlier than noon we took little breaks and just kept going till the sun disappeared behind the mountain. 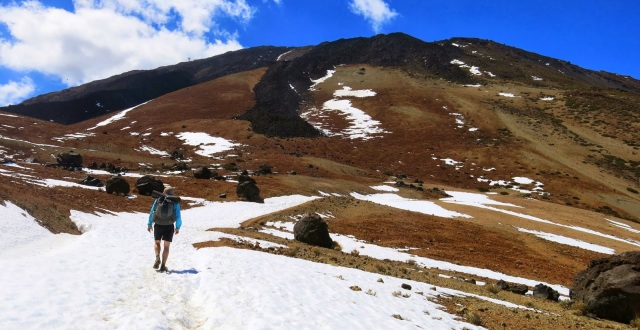 By that time we gained quite some elevation (+1400m/+4593ft) and were on a very steep patch on the mountain. The only even space we could find to set up camp was a snowfield at 3400m/11154ft. We had about 5 minutes of direct sunlight left, and as long as we saw the sun it was nice and warm. Yet as soon as the sun disappeared behind the mountain temperatures dropped immediately to 0°C/32°F. My fingers almost fell off and it took quite a while to get them warm again (they were hurting like hell!), rubbing my hands against eachother inside of my sleeping bag. After they got warm again, we decided to try and cook some dinner. Even though we weren’t feeling all that hungry (rather nauseous actually). Cooking turned out to be a challenge as we didn’t find a gas canister on the isle, neither did we find normal alcohol. So we had to go with some kind of alcohol gel which is normally used for lighting a grill haha! As a stove we just cup open a coke-can. We filled the cut open coke-can with the gel, used stakes as a potholder, melted some snow and hoped for boiling water… Na it didn’t happen, the snow melted but the water only got slightly warm cuz the gel wasn’t burning at these low temperatures. As we had couscous planned for dinner, it didn’t matter too much. We just let the couscous rehydrate and wanted to eat it cold. Anyway after waiting for about 5 minutes to rehydrate, we both took our first spoon and both decided: na a, my stomac doesn’t want that! So there we were, at 3400m/11154 ft, in the freezing cold (meanwhile the temperature had dropped to -8°C/17.6°F), had a pot full of cold couscous our stomacs didn’t want. So we tried to eat some trail mix and a cookie and we decided the only solution was to go to sleep. Luckely I had brought the mothership (my Western Mountaineering Antelope sleeping bag) and my ThermaRest NeoAir XTherm) so I had a toasty and warm night. Though I guess due to the high elevation gain in just one day (we had spend the night before at 300m/948ft above sealevel, so in one day we gained about 3100m/10170ft… which might just be a liiiiiittle bit too much) I didn’t have a very good night. But the scenery definitely made up for everything!!! When the sun set in the evening, we saw the shadow of the Teide summit in the clouds and in the morning we enjoyed an amazing sunrise!!!

Before sunrise the first hikers had started passing our camp and yelling to us, how crazy and cool we are (they had slept in a hut 200m below our camp) haha. We decided not to leave before sunrise as we knew it would be waaay warmer to break camp when the first sunlight would hit camp. So we took it nice and easy and by 8am we left camp to summit El Pico del Teide. We had 300m/984ft of climbing left and after about 1hour of steep trail we reached the summit. For the last 200m between 9 am and 4pm a permit is required. We had one but never needed it as we reached the summit before 9am. From the summit we had an amazing view over the isle and even could see the other canarien isles like La Gomera, Gran Canaria,…
Apart from the huge lava fields we noticed being on a vulcano cuz of the sulphur coming out of the crater. 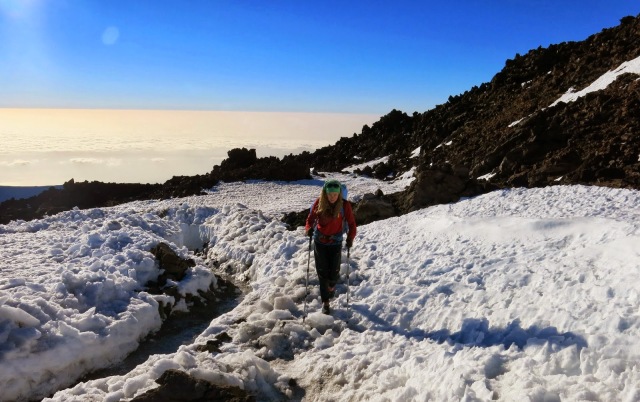 We didn’t stay on the summit very long cuz it promised to be a long and hard decend. Before, we actually thought it would be easier going down but na a! We decended along the southwestside of the mountain and man that was hard. Hours of hiking across loose lava stones requiring concentration big time!!! The sun was burning bad and by the evening we only reached the foot of the mountain at 2000m/6561ft. We did find an amaaazing campspot inbetween the mountain and the Roques de Garcia, complete silence and an breathtaking view! 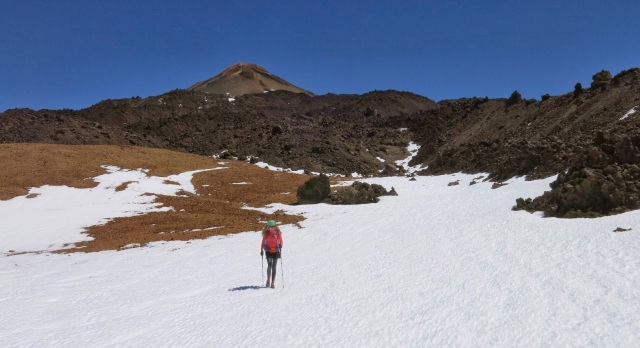 In the morning we passed the Roques, filled up our water bladders at the visitor center and made our way up the canadas to hike over the huge crater border. As soon as we crossed that one mountain range we could see the seaside below. So we made our way down thru bizarre moonlike landscapes, took the wrong trail to visit paisaje lunar, hiked back up cross country (man you can image me using tons of f-words!) and still missed paisage lunar. So we said “fuck it” and continued going down, now thru beautiful pine tree forests. Under a huge tree we found our next camp spot! Finally we had reached an elevation and a temperature zone were the gel in the stove would burn so after eating couscous for 2,5 days we finally were able to cook noodles. Mannnnn they tasted great!!! 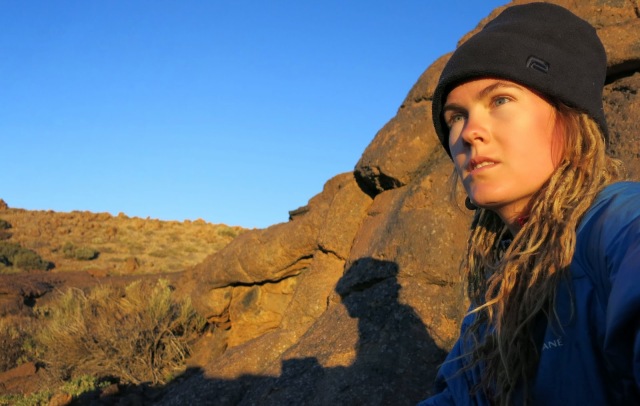 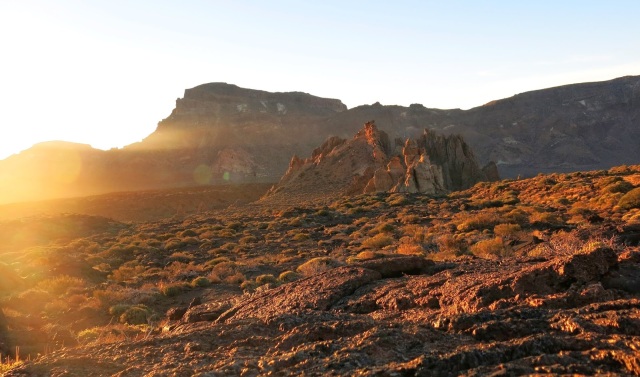 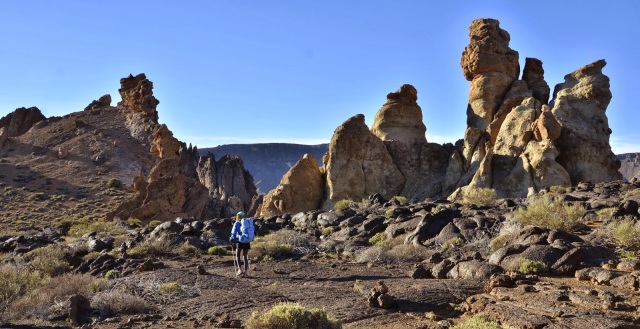 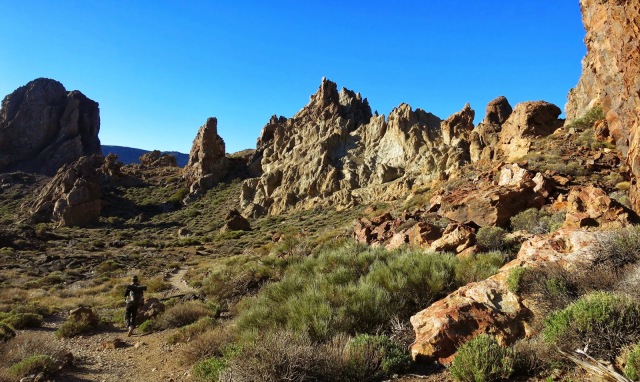 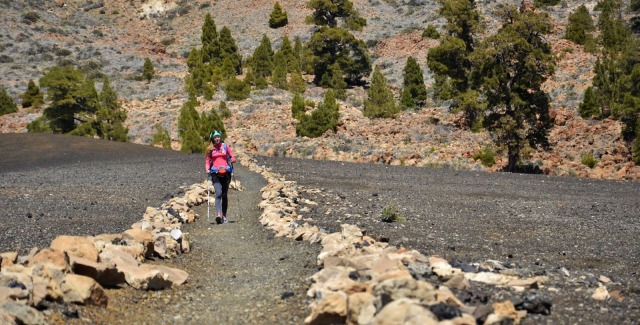 After a quiet night under that strong tree the stove was very generous and allowed me to make coffee. C.o.f.f.e.e aka gold to me!!!! That was just perfect.
The last day we reached another climate zone, leaving the pine forest, entering a greener landscape filled with cactus, agave, aloe vera and blooming bushes. The smell was amazing. As soon as we found a ripe cactus fig we picked it (there were tons and tons) and tried it. Yummy yummy but lots of “cactus needles”!
This zone used to be cultivated by farmers. It was structured in terraces, which seemed to be abandoned now. After 2 hours we reached the first village “Las Vegas”. From thereon it was hard finding a good trail so we had to do quite some asphalthiking till Villa the Arrica.

In Villa de Arrico we asked the guy at the local climbing school whether he knew a trail down to the seaside or not. There wasn’t one. Just the new (o well not all that new, it is 6 years old but still not drawn into the map) road, along which Daniel’s aunt Elke has a finca. So we decided to hitchhike (enough of roadhiking!) and after only 5 minutes we were crammed in the back of a tiny car of 2 lovely crazy people and made our way to the finca. We were dropped off right at the entrance of the property. During the last 20 years Elke’s husband Ernstl has build the place from zero on and made a paradise out of it. We both were impressed by what they had created! It definitely was the perfect place to end our hike across the National Park and to relax!

3 thoughts on “Hiking across the Teide National Park – Tenerife” 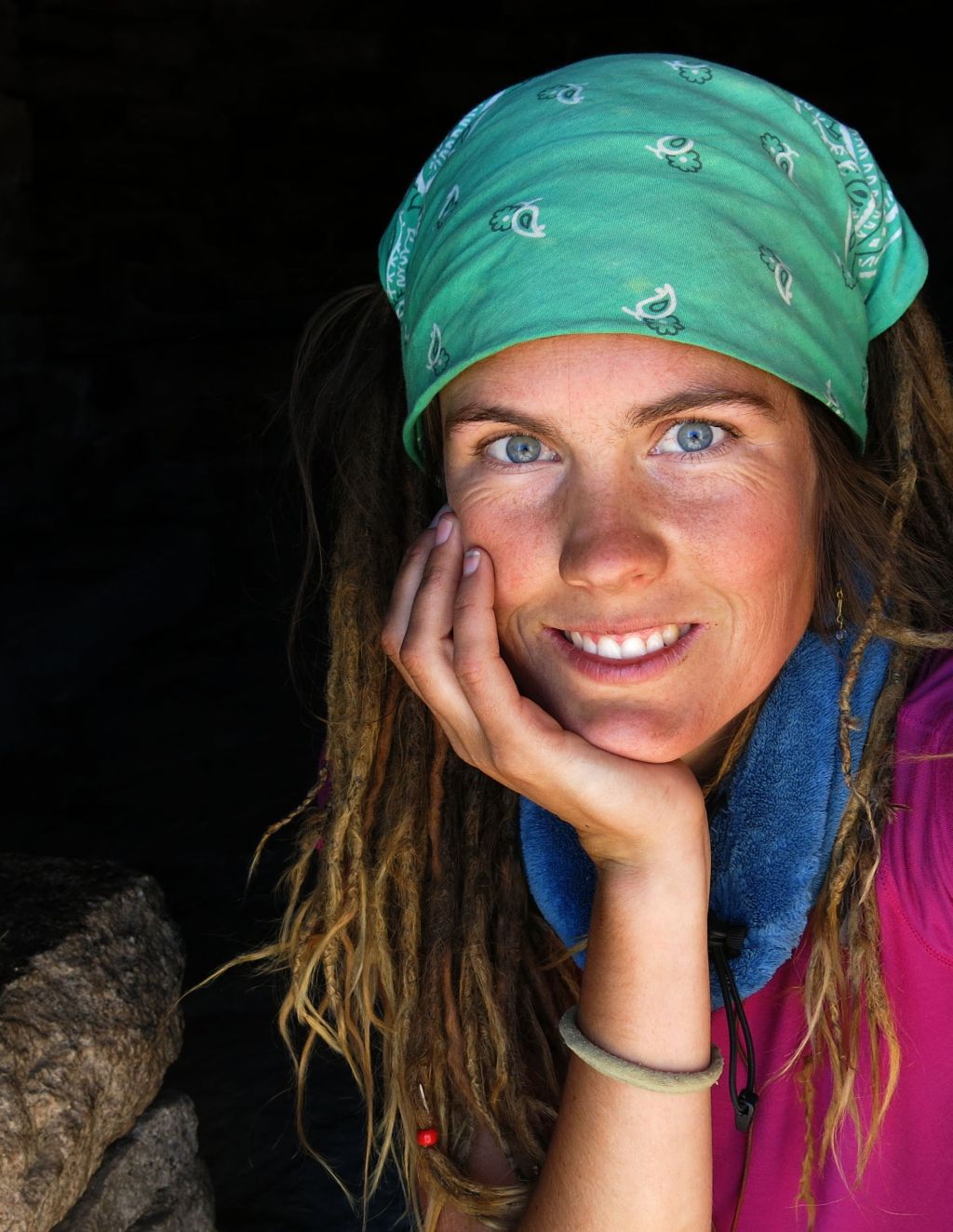