Day 33: Life gets hilarious in the desert

I wake up early. Sleeping in? What was I thinking. My bodyalarm is set for 5:30 am. Damn hiker routine. But they serve breakfast at 6am. Coffeee o yes. And pancakes. And bananas. And bread. And cereals. And milk. And everything I desire. Breakfastheaven!
Little Bear and Aquanaut have a rental car and plan on hiding some watercaches for the next loooong dry stretches. Headquarters and I join them and after getting water, beer and coke at the supermarket, one of the craziest rides in my entire life begins.
We head out on the highway with a chevrolet sonic. It’s tiny for american standards, and low to the ground. We leave rainy Tehachapi and the sun comes out as soon as we get to Mojave. We hide our first cache. It’ll turn out to be the easiest one. But that we didn’t know yet,  we ‘ frikkin out of our mind zero dayers’. Onward to the next cache. A closed gate stops us, no trespassing. We leave the cache for what it is and head out to the next one. Offroad and dirtroads are an understatement. The only vehicles we see out here are quads and sand buggies. It’s ridiculous. But fun. And hilarious. Over the top hilarious. 2 american divers in the front, both wearing a hawaian shirt, 2 europeans in the back living on the border of excitement and carsickness. We reach the cacheplace, where the PCT crosses a dirt road. We hide water and beer and coke. Hikers come. Some we know. It’s 10 am but noone says no to a cold beer. A girl with a ukulele shows up. I try to play it but I can’t remember much. It’s still fun. Aquanaut and Little bear with their hawaian shirts and me with the ukulele. We should throw a hula party in the middle of this frikkin desert! But we need to hurry. We still have 2 caches to hide. And then we realize the dirtroads have been easy peasy so far. It takes us an hour to get to the next one and we still don’t make it all the way up. Little bear is the best driver ever, but the sonic just isn’t made for this. O no! I close my ears and eyes while the bottom of the car scrapes the road, several times. Autsch! Driving over all the washboards probably is fun with a quad but with a sonic it’s … frankly I don’t know how to describe it. Aquanaut bumps with his head into the ceiling more than once and I need all the focus I have to stay in my seat and not get carsick. I wonder when the car will land on its side. Thank god it doesn’t. I’m not sure what I feel like. This is hilarious I keep saying It’s surreal! At one point only 3 wheels touch the ground. Holy fuck! I cross my fingers. This is one of the most insane rides ever! Driving to the last cache doesn’t take long, cause we can’t get nowhere near to it.This is it for the sonic. We’re still impressed how far you can get with a tiny car. We don’t wanna know how it looks from underneath though hahaha.
We rush back to Tehachapi. We only have one and a half hour left to buy our resupply for 14 days, prepare packages for the Sierra, and get to the postoffice. Resupply madness. Absolute madness. We make it to the PO just in time and then I’m done. This day has been mad crazy over the top hilarious! I spend the rest of the evening laying on the bed, sipping wine, recovering from this zeroday. It’s a day I won’t forget soon, no, never! 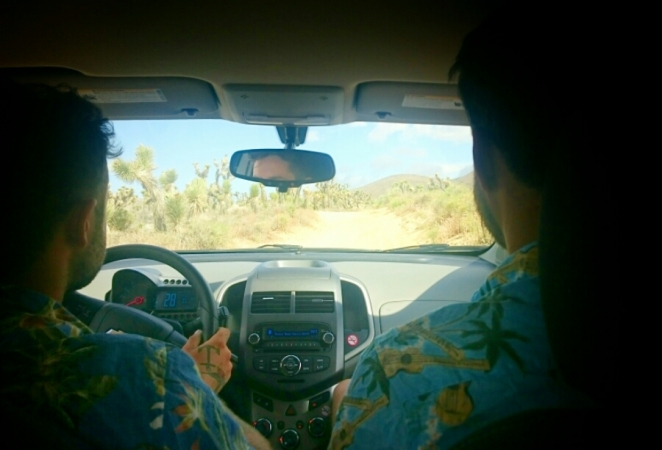 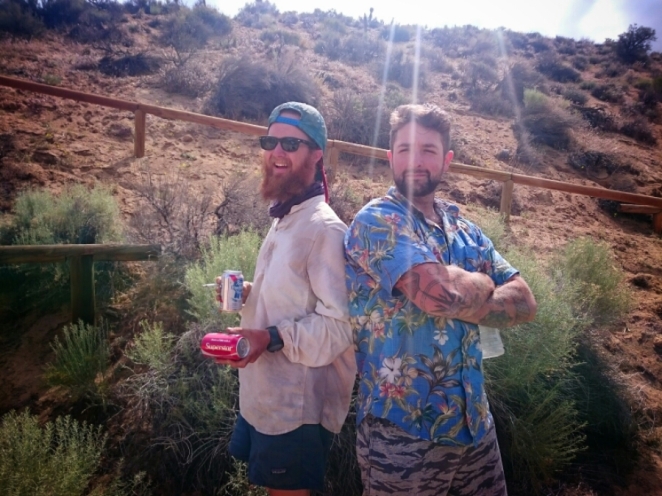 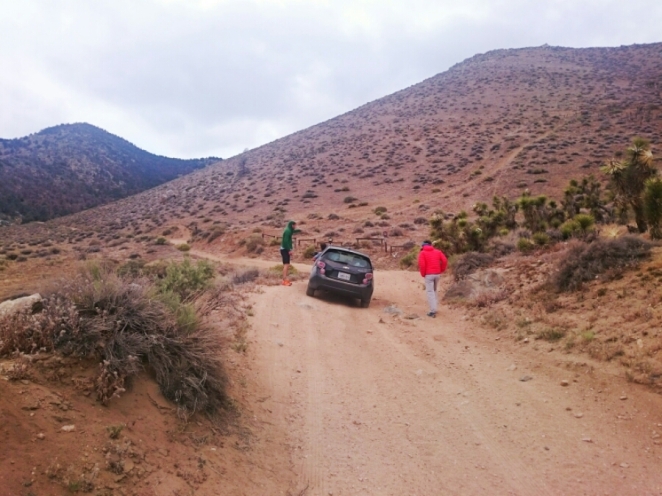 One thought on “Day 33: Life gets hilarious in the desert”